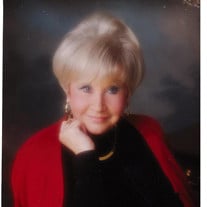 Elizabeth "Bebe" Faas Rice passed away on December 26, 2020. She was born in Philadelphia, Pennsylvania on February 13, 1932 to Laughlin Faas (a World War I Marine Veteran) and Marie Christie. She grew up in Iowa and California, graduating from the College of the Holy Names, Oakland, California, in 1953, with a degree in English Literature and Medieval History. Upon graduation, she was commissioned a Second Lieutenant in the United States Marine Corps and was assigned to HQMC, Washington, DC where she met her future husband. She married W.H. “Duff” Rice in 1955 and they celebrated their 65th wedding anniversary this past November. The Rices moved many times during General Rice’s career, living in 24 different homes on posts and stations both in the country and overseas. Bebe also traveled a great deal in Europe and the Far East, as well as in Australia, Canada and Israel. Bebe was a noted author of children’s books, and had 18 of her children’s books published, plus numerous stories and articles for both adult and children’s publications. A number of her children’s novels were translated and published in German and French and recorded as audio titles. In addition to her writing and responsibilities as a Marine wife, Bebe was also active in numerous volunteer activities and taught adult classes in writing, giving lectures, presentations and seminars in the field of continuing education. Immediate survivors include her husband, their son, John, a foreign service officer, daughter-in-law Marie, and three grandchildren-David, Rebecca and Sarah. Interment will be private at Quantico National Cemetery. Please share online condolences with the family at www.loudounfuneralchapel.com

Elizabeth "Bebe" Faas Rice passed away on December 26, 2020. She was born in Philadelphia, Pennsylvania on February 13, 1932 to Laughlin Faas (a World War I Marine Veteran) and Marie Christie. She grew up in Iowa and California, graduating from... View Obituary & Service Information

The family of Elizabeth Faas Rice created this Life Tributes page to make it easy to share your memories.

Send flowers to the Rice family.